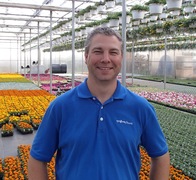 James Gibson received his B.S. in plant and soil sciences in 1996 from West Virginia University, Morgantown. He later earned his M.S. and Ph.D. in 2000 and 2003, respectively, from North Carolina State University. After graduate school he worked as an assistant professor at the University of Florida. In 2007 he became Corporate Manager of Quality Control for Conrad Fafard, Inc., followed by Fafard’s R&D Director and Technical Services Manager for Syngenta Flowers. His current position is Technical Lead for Syngenta Flowers working with broker and grower communities on flower trials and crop culture.